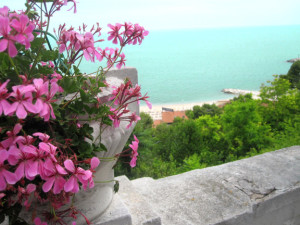 On the other side of Monte Conero are two cities that tend to overlap in the minds of tourists: Sirolo and Numana.  It wasn’t until I attempted to sort through all of my pictures that I fully understood the difference between the two.  Sirolo stretches on for a bit along the hilltop before blending into the similar layout of Numana- “Lady of the Conero”, and of the Adriatic coast. 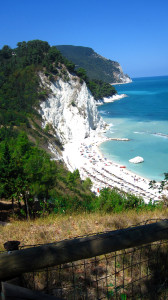 The city of Numana can be divided into two parts: Numana alta and Numana bassa. Numana alta is the historical section of the town, at the top of the hill.  There are quaint streets, long sets of shallow staircases, colorful flowers, and an amazing observation plateau that provides views of Monte Conero, the beaches below, and a shoreline that continues into the horizon for another few hundred kilometers.  From this scenic balcony, there are steps that lead down to la Spiaggiola, a beach in the midst of a sea alcove.  This beachline stretches on to the right, crossing the line into Numana bassa: the Marcelli port, the newer section of town adjacent to it, and the stretch of coast next to that.  Ecco Numana.

Beach Talk:
Numana’s most northern beach is Dei Frati, and it is the quietest and most secluded of the four.  La Spiaggiola, the main beach of Numana Alta, is made up of similar white pebbles and offers chair/cabin rentals.  Due to a line of rocks in the sea parallel to the beach, the waters here are usually very calm.  During the summer, there is a free bus that offers transportation every thirty minutes between the city center and the beach.  Around the corner is Numana bassa Beach; adjacent to the marina and full of restaurants, beach facilities, playgrounds, and bars.  There is free parking for cars around the harbor and paid parking along the seaside- although both fill up almost instantaneously in the summer, so it might be better to park outside of the city center and have a stroll to the beach.  Finally, to the south, is Marcelli Beach: a domino stack of beach facilities and restaurant bars on the golden-pebbled beach.  During the summer (especially Friday nights, June and July), there are dance parties on the beach that last most of the night. 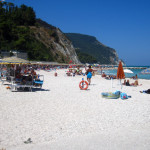 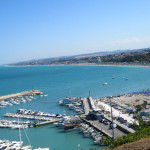 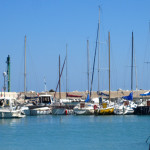 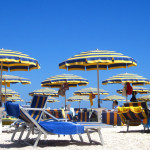 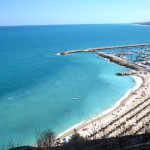 City Talk:
Around the city and beachside, there is a variety of offered activities:  birdwatching, beach volleyball, card tournaments, cycling, horseback riding,boating,  running (Monte Conero Marathon), kite flying, snorkeling, golf courses.  But there are also a few pedestrian streets through the historic center that offer architectural treasures (see the Santuario del Crocifisso and the Bishop’s Palace) and historical treats (see the arco di torre e acquedotto, both stamps of Roman rule and construction, as well as the antiquarium statale).  There are window shopping opportunities and a few art galleries, as well as a beautiful observation deck and authentic restaurants.  As in the rest of the Ancona region, local cuisine focuses on mussels, bordetto, rabbit, anchovies, and other fresh shelled sea creatures (and gelato, of course). 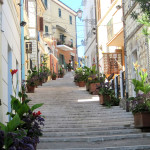 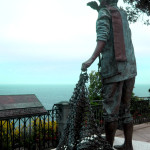 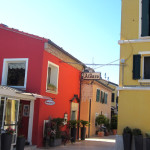 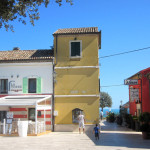 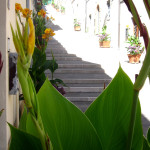