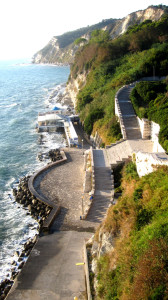 Passetto is the name of the most famous beach of Ancona, as well as the accompanying neighborhood.  Heading east from the city center is Viale della Vittoria, a long boulevard lined with trees that cuts through the entire city and ends with a giant monument on top of a pedestal (in the summer, day and night, the steps are covered with couples, school groups, and old men with dried bread in their hands).  Designed by Guido Cirilli, this massive, white masterpiece was created to honor the fallen soldiers of World War I.  When you look out the other side of the monument, you realize that you have reached the edge of the city; out of nowhere, you hear the powerful roar of waves, smell the sting of salt, and feel a certain thickness in the air.  At the edge of your feet is a sudden drop; hundreds and hundreds of little steps bring you down from Passetto at city-level to Passetto at sea-level.

When Gregory was a child, he went often with his mom and grandpa to eat at the grotte of family friends.  In the past, fishermen used these grotte to store their boats, but today, the great majority of them serve as converted living rooms for families that lounge at the Pasetto from sunrise to sunset on colorful summer days.  Taking a left at the bottom of the long series of stairs, you will see a series of gates attached to the side of the cliff; during the summer, these grotte are open and people are playing music, making bonfires, and enjoying a lunchtime glass of white wine.  During the winter, these sheds remain closed, but you can still admire their colorful facade. 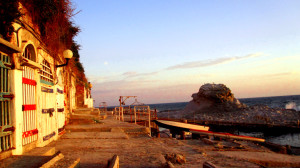 The entire curve of the Passetto stretches on for a bit, ending with a huge diagonal plane of rock that is great for sunbathing or merely lounging on a towel and reading a book.  When you want to return to the city level, there is a hidden staircase tucked away in an alcove that will bring you back to the park (and provide some Kodak moments), as well as a panoramic elevator.  Or you can make the trek back up the many stairs. Standing at the bottom of the staircase and looking up, you can see why it it nicknamed “The Crowned Eagle”:  the looping, symmetrical stairways form the wings of the bird, and the pillared monument on top serves as the crown.  To any ships sailing toward shore, this stone bird would have greeted them from miles away. 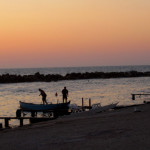 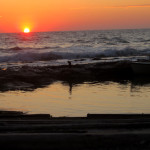 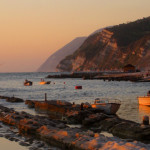 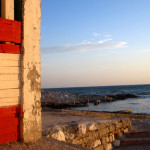 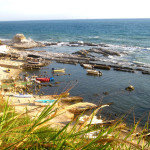 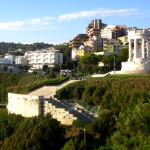 At the top of the ascend, you are back at La Pineta del Passetto, a little park surrounding the monument and the heart of the district.  The residential district is developed around the War Memorial in Piazza IV Novembre and extends into the hills of Monte Pelago and Monte Santa Margherita.  Mostly residential, but there are also a few hotels, caffe’s, and kiosks scattered throughout.  This neighborhood is one of the pricier piers in Ancona, but features spectacular views, free of charge, to anyone that takes the path along the cliffs on the southern side or strolls to the top of the park on the northern end. 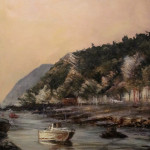 *Julia loves this place so much, that she even dedicated a canvas to it.  She suggests that, for maximum pleasure, you wake up when the sky is still dark, make the walk down to the rocky beach, spread a blanket on the ground (or on some grotta‘s front porch), open up your thermos of hot tea, and wait for the sun to peak over the horizon and bring illumination to the most breathtaking view of Ancona.